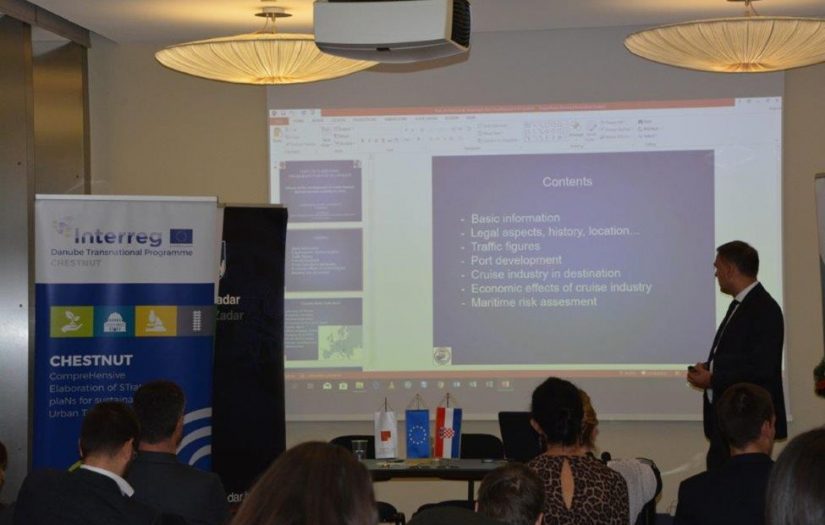 Rector’s palace in Zadar was host of an interesting lecture to key stakeholders and general public within project CHESTNUT- Comprehensive elaboration of Strategic plaNs for sustainable Urban Transport.

Gathered multitude beside informations about general objectives and priorities of the project has also gotten the answers to questions: „ What is SUMP?“, „ What is FUA?“ . Furthermore, it has been announced in which phase is the process of making Sustainable urban mobility plan. After the series of lectures have finished panel discussion has been held where participants actively tried to find the solution to raising mobility level at FUA Zadar.

By solving current issues the stress has been put on using the cycling potential during which has been pointed out the lack of bike roads, especially in peripheral parts of the city. Information about 15 kilometers of bike roads in FUA Zadar clearly indicates the existence of infrastructural deficiencies.

Cruising tourism and its effect on strengthening tourist arrivals during summer period has been touched upon. Gaženica port development as an important port on the East Adriatic coast has created more congestion and traffic issues, especially during the summer period.

Participants agreed that efforts should be made in making intermodality the common appearance , to tourists as well as citizens of Zadar, with the goal of reducing the pollution and increasing traffic efficiency. Bearing in mind the aforementioned issues Zadar County development agency through CHESTNUT project and in cooperation with mobility experts has made the FUA Zadar SUMP. Basic goals of SUMP are raising traffic security, reducing the greenhouse gasses emission and fossil fuels consumption, raising the quality of life,  healthier environment and reducing detrimental outcomes that modern traffic in urban areas leaves on the citizens health.

Project CHESTNUT is financed from transnational cooperation programme Interreg Danube 2014-2020. Total value of the project is 2.004.272,18 EUR, and the goal is to improve connection and interoperability of traffic system based on the integration of different means of transport like public transport, cycling, using electric vehicles and others.